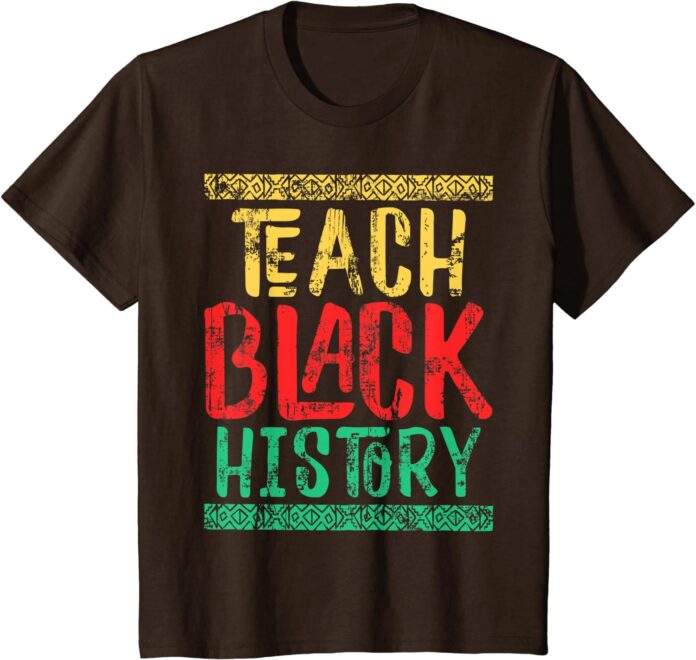 When you’re looking for a great shirt that celebrates Black history month, consider some of the brands that offer them. Target, Old Navy, and WMCAT are just a few options that you may not have thought about. The WMCAT logo and other black history-themed apparel are both stylish and affordable, and a great way to show your support for WMCAT. These brands are committed to empowering and supporting the Black community.

The Black History Month collection is an effort to celebrate diversity by highlighting three Black artists with Old Navy’s PROJECT WE campaign. The campaign features graphic tees that celebrate a diverse range of art, cultural moments, and movements. The tees feature cartoon-like animation and silhouettes with key details. Old Navy is committed to bringing awareness to these causes throughout the year, and the t-shirt campaign is a great way to do so.

Old Navy’s Black History Month t-shirts come in both kid and adult sizes. Project WE tees are made with the love and appreciation of the Black community and culture. And the price is right, too. These tees are under $15. In addition to being stylish, they’re also affordable – you can buy them for your entire family. Even your kids will love wearing these tees this month.

Old Navy has been celebrating Black History Month since 2000, but recently has expanded their line to include products by Black-owned designers and businesses. Their new collection features products such as headwraps and satin-lined hats, and they also carry clothing. You can even shop for a tufted pillow that features the Ghanian Adinkra symbol of knowledge. This collection includes shirts and accessories that celebrate these cultures.

While the shirts and hoodies for Black History Month might seem like they’re made by someone who doesn’t give a crap, Target’s line of African-American t-shirts is anything but ordinary. These shirts aren’t just made by black designers, either. There’s also a tee featuring the names of HBCU students, as well as T-shirts for your little one.

The company’s t-shirts feature artwork by independent artists and are available in sizes ranging from XS to 5XL. You can choose between crew neck, v-neck, and short or long sleeve t-shirts. Among the color choices are t-shirt styles that feature a slim or active fit, and t-shirts with moisture-wicking properties for maximum comfort.

Some t-shirts feature images of famous black women. The hoodie is made by a Baltimore-based company called MESS in a Bottle. Target is celebrating Black history month in February by selling hundreds of items designed by Black designers and businesses. Although the shirts are made by a minority group, not everyone was happy with the results. Others viewed the campaign as a tacky way to cash in on social movements.

If you are looking for a cool shirt to wear during Black History Month, look no further than the WMCAT Teen Arts + Tech Program t-shirts. This nationally recognized screen printing program offers teens an opportunity to explore and apply their creative talents. They will also learn about the importance of civic engagement. Each shirt will feature a timeline of Black history and include a special design by a professional artist. The proceeds from the sale of this T-shirt will help WMCAT continue to provide opportunities for young people to participate in their communities.

The designs for the Black History Month shirts were created by two Grand Rapids teens, Elijah Brown and Jalexia Bruce, with the help of a professional artist named Bruce. These designs are being sold at participating Meijer stores throughout the Midwest. The shirts feature a time line that spans Black history from the earliest human ancestors to modern day. The shirts will be available until supplies last.

During black history month, WMCAT will be selling new clothing for a cause. The WMCAT Teen Arts and Tech Program, which empowers youth to express themselves through the arts and technology, is one organization that is helping to spread the message about the importance of black history. The Teen Arts and Tech Program works with youth in high school to engage in creative pursuits that push social progress. Meijer contracted Ambrose at WMCAT to design and print 4,000 t-shirts, and each shirt was printed in Grand Rapids, Michigan.

Meijer partnered with WMCAT to spread the word about its Black History Month initiative. Two students at Grand Rapids’ Preparatory Academy and one instructor at the West Michigan Center for Arts and Technology’s Teen Arts and Tech Program, created two unique designs that highlight the importance of making history. Upon selecting the winning designs, WMCAT’s Ambrose at WMCAT social enterprise produced and distributed the t-shirts to the two57 Meijer stores in six states.

During Black History Month, WMCAT’s Teen Arts + Tech Program is proud to release a new collection of t-shirts. The designs feature an original quote by a WMCAT student, paired with a screen print from a professional artist, Bruce. The nearly four thousand T-shirts are available at participating Meijer stores. This partnership is a great way to support local and regional arts programs and celebrate black history.

WMCAT is an arts and technology business based in West Michigan. Its Teen Arts + Tech Program empowers young artists and connects them with their community. This program is made up of teens from all eight Grand Rapids Public High Schools and includes mentorship from local professionals. To help the teens with the designs, WMCAT worked with Ambrose, a custom design company. Meijer contracted Ambrose to design and print the t-shirts. Each shirt was designed and printed in Grand Rapids, making it a great way to support the organization.

Meijer is also celebrating Black History Month by launching an exclusive collection of t-shirts to celebrate Black history. This year, the company is highlighting unique products from Black-owned businesses and designers. Be Rooted, an apparel line, is a product created by former Target team members and now sells at Meijer stores. The company also supports Black-owned businesses through its Forward Founders accelerator program.

The WMCAT organization is bringing back black history sweatshirts to raise money for a great cause. The proceeds from the sale of the sweatshirts will benefit a great cause, WMCAT Teen Arts and Technology Program. The organization provides opportunities for high school students to engage in civic engagement and creativity while supporting the WMCAT mission. These black history sweatshirts are available at retail locations across the Midwest for a reasonable price.

The WMCAT Teen Arts and Technology Program is a nationally recognized program that works with youth to develop original artwork for a variety of projects. For Black History Month, the center is teaming up with the local Meijer to create shirts and other apparel. Two high school students from Grand Rapids collaborated with a professional artist to come up with two designs. The shirts were then sold at Meijer stores throughout six states.

WMCAT, a statewide arts education center, is teaming up with Meijer to sell Black History Month apparel. The T-shirts will feature artwork by a local Grand Rapids high school student, Elijah Brown, and professional artist Jalexia Stoutmyre. The shirt will feature a timeline of Black history accomplishments. The shirts will be sold at 220 Meijer locations throughout the Midwest.

WMCAT’s Teen Arts and Tech Program is an initiative focused on bringing together West Michigan’s youth through art, technology, and community engagement. This program works with students from all eight Grand Rapids Public high schools and includes mentorship from local professionals. Meijer contracted with Ambrose at WMCAT, the nonprofit’s custom design and screen printing social enterprise, to screen-print the shirts. The shirts will be sold across the Midwest as long as supplies last.

WMCAT’s Teen Arts and Tech Program has partnered with Meijer to design Black History Month T-shirts. The design features a bird freed from its cage. It was inspired by stories of Black people making history in America. The goal was to create conversation starters that would encourage others to learn more about the subject. The design is one of nearly 4,000 shirts available at participating Meijer locations.

Meijer, a large grocery chain with over two hundred stores, partnered with WMCAT to create the shirts. Students from Grand Rapids High School and professional artist Jalexia Stoutmyre designed the black-themed shirts. Meijer will sell these exclusive shirts throughout the Midwest. WMCAT and Meijer hope to promote the art program in the community and encourage people to buy shirts.